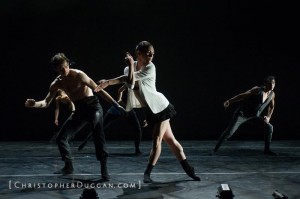 Beyond the Edge of the Frame, Choreography by Sidra Bell, Photo by Christopher Duggan

MISSION STATEMENT: BODYTRAFFIC is a non-profit repertory dance company that lives, breathes, and thrives in Los Angeles. The company relentlessly recruits great talent from around the globe to create world-class contemporary dance in Los Angeles. BODYTRAFFIC’s growing repertory of work is inspiring, accessible, and challenging to both new audiences and experienced enthusiasts.

And at midnight, the green bride floated through the village square: Choreography by Barak Marshall, Photo by Tomasz Rossa

Founded in 2007 by Lillian Barbeito and Tina Finkelman Berkett, BODYTRAFFIC has surged to the forefront of the concert dance world. Named “the company of the future” by The Joyce Theater Foundation, Dance Magazine’s 25 to Watch in 2013 and Best of Culture by the Los Angeles Times, the young company is already internationally recognized for their high quality of work. 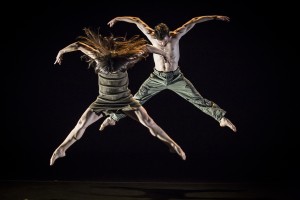 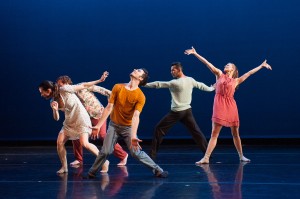 BODYTRAFFICE was awarded a National Dance Project: Production Grant in 2014 to commission a work by choreographer Victor Quijada (Director/ Choreographer of RUBBERBANDance), which will be further supported by an NDP Touring Grant for its 2014/15 season tour. Additionally, in 2013 choreographer Loni Landon was awarded a Choreography Fellowship with BODYTRAFFIC from the Princess Grace Foundation.

Born from the sheer love of dance, BODYTRAFFIC’s spirited environment is blossoming because of its dedication, passion, and exquisite talent. BODYTRAFFIC is helping establish Los Angeles as a major center for contemporary dance.

• Performance, Place, and Politics: The dancers of BODYTRAFFIC are superb… This is a technically accomplished company with lots of personality to boot.

…one of the most talked-about young companies, not just in L.A. but nationwide..Los Angeles is not exactly known for its thriving contemporary dance scene, but if anyone is changing that reputation, it’s Lillian Barbeito and Tina Finkelman Berkett, directors of this fledgling repertory company.

•artsmeme.com, Debra Levine (dance writer for Los Angeles Times and The Huffington Post), September 2012: Marshall fielded the ten ripping dancers of BODYTRAFFIC, a local troupe that has been on a steep upward climb lately, garnering awards and grants from New York’s Joyce Theater Foundation. The piece was at its best when the ‘Traffickers spooled Marshall’s quick-paced, unison nervous-twitching at which he is the undisputed king and that’s a huge kick to watch. BODYTRAFFIC excels at this draconian stuff.

• The New York Times, Brian Seibert, June 2012: On Wednesday at the Joyce Theater the Gotham Dance Festival offered New York something that its dance audiences (and critics) rarely see: signs of life from the Los Angeles dance scene.

• artsmeme.com, Debra Levine (dance writer for Los Angeles Times and The Huffington Post), June 2012: Did everyone feel the earthquake that rocked the top of the 405 Freeway near Mulholland Drive Thursday night? Oh, you missed it? It was the tremor of excitement when BodyTraffic, Los Angeles’s newest and best entry into the contemporary dance universe, shook the stage of the University of Judaism’s Gindi Auditorium. The ten- member troupe, co-directed by Lillian Barbeito and Tina Finkelman Berkett, delivered beautiful dancing across the board in three diverse works of contemporary choreography.