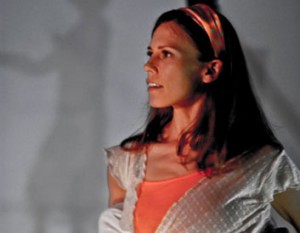 Lillian Barbeito is the Co‐Director of BODYTRAFFIC. She is a native of Santa Fe, New Mexico where she trained with the Santa Fe Dance Foundation and worked with The Santa Fe Chamber Music Festival, Southwest Ballet and the Santa Fe Opera. After graduating from the Juilliard School on a four year, full tuition scholarship awarded by Tomorrow’s Leaders of America, Lillian had a copious free lance career in Europe, New York, and Los Angeles. She worked with organizations such as the Metropolitan Opera, New York City Opera, Zvi Gotheiner, the Agnes DeMiIlle Project, American Repertory Dance Company, Helios Dance Theater and John Malashock. She appeared at the 2006 and 2007 Grammys, in several music videos, and feature films including projects with Angela Luna, Beruit and Spike Lee. Lillian is a sought-after teacher and choreographer. She has taught for Lyon Opera Ballet,  Idyllwild Arts Academy, Northwest Dance Project, San Francisco Conservatory of Dance, Southland Ballet Academy, Westside Academy of Dance and UCLA’s department of World Arts and Cultures. She is currently a Visiting Assistant Professor at Loyola Marymount University. Ms. Barbeito is one of 15 instructors in the world certified to teach Countertechnique, a revolutionary movement system developed by Anouk Van Dijk in Amsterdam.