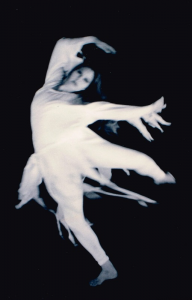 Holly Mistine began her formal training in ballet at the age of seven with Marnell Himes-Ushijima in the Cecchetti Method of Classical Ballet through the Imperial Society of Teachers of Dancing (ISTD). Based in London, England, this method has been the foundation for the Royal Ballet School, the National Ballet School of Canada, and for the teachers training program through the National Ballet of Canada. While continuing her training through the Cecchetti curriculum, Holly Mistine became a featured and award-winning dancer under the direction of former ABT dancer, Collleen O’Callaghan, in the Classical Dance Department at the Orange County High School of the Arts (OCHSA), becoming exposed to other dance forms such as modern, flamenco, hip-hop, African, and Japanese. At age 17, Holly Mistine held simultaneous apprenticeships with the Los Angeles Chamber Ballet and Carla Luna’s Flamenco Ensemble. She went on to work with the modern dance company Brockus Project Dance Company and to perform flamenco professionally at various restaurants and private events. She then pursued teachers’ training courses through the ISTD, presenting students of her own for Cecchetti examinations while also preparing dancers for recitals and competitions. Holly Mistine then returned to her roots as a professionally trained classical ballerina to perform in Inland Pacific Ballet’s Giselle and to work with world-renowned artist Patrick Frantz [former premier danseur (principal dancer) of the Paris Opera Ballet] and his contemporary ballet company La Danserie, simultaneously working with Esencia Flamenca Professional Dance Company and earning recognition as one of the top 5 dancers for 2003 by the Beverly Hills Outlook. The Los Angeles Times’ Victoria Looseleaf called her “…stellar…Holly Mistine, all passion – on pointe…;” Mischa Kopitman (Los Angeles-based writer and award-winning composer) stated “…Holly Mistine, all fluidity and grace…;” and L.A. Weekly’s Steven Leigh Morris acknowledged “…robust and erotic flamenco dances provided by Holly Mistine…” In December, 2005, her first efforts at choreography for the professional realm earned her promising recognition by Los Angeles Times staff writer Lewis Segal:

“…sometimes a contemporary artist will rethink a ‘Nutcracker’ concept and come up with something as distinctive as Mark Morris and Matthew Bourne did in their radically revamped stagings. That happened…during Holly Mistine’s ‘Spanish (Chocolate)’ solo…a thoughtful, inventive conversation between ballet and flamenco sensibilities.”