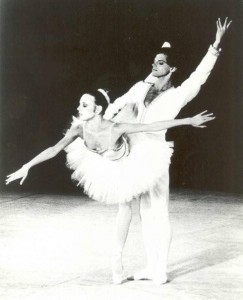 His first ballet appearance was at the age of eleven as the “Nutcracker Prince” in Balanchine’s New York City Ballet production of The Nutcracker at the Greek Theater. Other early performances were as a regularly featured dancer on the Danny Kaye and Dinah Shore television shows. He also was a young actor often seen on the Donna Reed Show and Death Valley Days (hosted by Ronald Reagan). His first major choreography, at age 16, was for a production of West Side Story (conducted by Leonard Slatkin) for the Los Angeles Youth Theater. His other Los Angeles choreography was for an early attempt at the establishment of a resident ballet for Los Angeles, the Western Ballet Association. Mr. Clifford was a principal dancer and choreographer for this company, which was founded in 1965 by Balanchine under the name of Ballet of Los Angeles. The name was changed when Eugene Loring followed Balanchine as director of this short-lived company, but this is where Balanchine first became aware of Clifford’s choreography (he created two original ballets in the Summer of 1966). After seeing some rehearsals of his ballets Balanchine invited Clifford to move to New York and begin choreographing for his School of American Ballet. 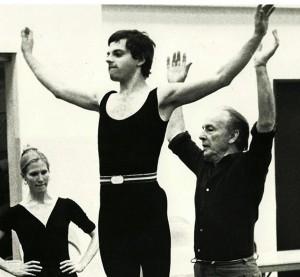 George Balanchine choreographing “Dances Concertante” on John Clifford as Lynda Yourth looks on. The choreography was for the first Stravinsky Festival.

In October of the same year, at the age of 19, Balanchine asked Clifford to join the New York City Ballet (NYCB). He choreographed his first of eight ballets for that company at age twenty, making him the second youngest resident choreographer in history attached to a major company. The first was George Balanchine himself, who was the same age when he choreographed his first ballets for Les Ballets Russes de Serge Diaghilev. Mr. Clifford quickly rose to principal dancer status and had numerous principal roles created for him by Balanchine, Jerome Robbins, John Taras, Todd Bolender, and Jacques d’Amboise, and danced the leading roles in 45 other ballets, more than any other leading male dancer. Before he founded the Los Angeles Ballet, Mr. Clifford was the first American male dancer in history to dance as guest artist with the Paris Opera Ballet. He was also a popular guest on numerous European galas, dancing on the same programs as the legendary Yuri Soloviev and Irina Kopalkova to name but two great stars. During these years, he was also commissioned for new ballets by the San Francisco Ballet, the Royal Winnipeg Ballet and the Deutsche Oper Ballet (Berlin), and was also invited by this same company, at the age of twenty-five, to become their artistic director. He declined their offer.

After the Los Angeles Ballet went defunct in 1985 due to financial woes, Clifford established the Ballet of Los Angeles in 1988. The new company was considerably smaller with a core group of 16 dancers. During its four season run, BOLA focused heavily on performance tours of the United States.

In 2005 Warner Bros Theater Ventures, Inc. commissioned and financed Clifford’s new company, Los Angeles Dance Theater to produce a full-length dance version of their classic film, “Casablanca.” This production was for a special Gala series of performances in Beijing, China at the historic Great Hall of the People. 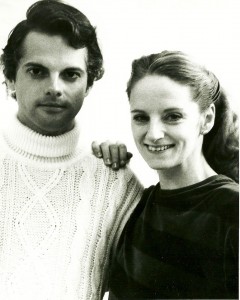 Mr. Clifford was the artistic director of Robert Redford’s Sundance Institute Video/Choreographer Program and produced “The Art of the Pas De Deux”, a video distributed by VIA (Video Arts International).

“Mr. Clifford is that rare breed in ballet, a real choreographer. This talent, evident so early, was confirmed now…” Clive Barnes, The New York Times

“First, there was the Los Angeles Ballet, and now there is Ballet of Los Angeles. John Clifford has begun anew. Mr. Clifford’s ballets can explode with the brilliance of firecrackers.” Jack Anderson, The New York Times

The company is exuberantly neat and fluid, and his choreography has a wild and original inventiveness. Clifford has created a fine company and a significant one in his own dance image – you can’t do more.” Clive Barnes, The New York Post