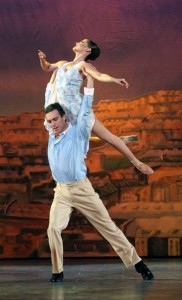 Dancers Marife Gimenez and Douglas Gawriljuk in rehearsal for Casablanca, The Dance

John Clifford’s new Los Angeles Dance Theater was founded in 2003 at the request of Warner Bros. Studio for the purposes of creating Clifford’s dance-musical production of, “CASABLANCA, The Dance” based on their classic film, CASABLANCA.  This $4 million dollar extravaganza was premiered in Beijing, China at the historic “Great Hall of the People” as the opening event of their yearly Drama Festival.  Over 15,000 people saw the three performance run and gave it standing ovations at each performance.  The new specially commissioned score was by Clyde Allen (using music from the film including, “As Time Goes By” and original music), sets by John Iacovelli, costumes by A. Christina Giannini, and lighting and projections by Marc I. Rosenthal.

The company is now developing other large-scale dance events.