VELOZ AND YOLANDA: Walk in – Dance Out 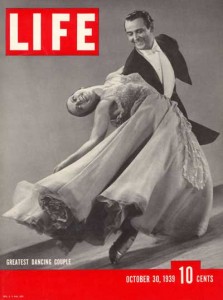 If you walk into the building located at 12 South Euclid and Colorado in Pasadena, California today you probably won’t dance out. But in the 1940’s many future “diamonds “ did walk in and dance out.

The Veloz and Yolanda Dance Studio opened their doors at 10:00 AM and for 12 hours they taught the dances that were the rage in the big ballrooms and small living rooms of the 1930’s and 40’s. “Walk In – Dance Out” became the slogan of the Veloz and Yolanda Dance Studios, and if you could not walk out a “diamond” there was always the possibility of a “ruby” or an “emerald” in your future.

A “ruby” was the first step along the path towards ballroom expertise, followed by the “emerald” and the ultimate “ diamond.” Each dance style had a series of eight steps or combinations that had to be mastered before going on to the next level. For example: In the Rhumba the box step, the walking steps, etc were the precursors for advancement to the next level, followed by left and right spot turns, etc, for the next advancement, then all the above plus the freeze, girls’ spot turn, etc. Each of the other dance styles taught – Waltz, Fox Trot, Smooth Swing, Tango, Samba, Mambo – had similar sets of requirements for advancement.

In their dance studio brochure the Rhumba is described as “the dance that is being done in America, which we call the Rhumba, differs from the Cuban Rhumba, the Son, because it is modified to be more refined and slower.” Also, the Son rhythm and accents are furthered simplified – changing the accent from the second beat of the music to the first – thus accommodating the white male dance leader and his partner.

The Samba, another of their dance specialities, was also derived from a more complex form called the Batuque (“colored peoples’ dance”) in Brazil. The Batuque was a fast stomping, clapping, circle dance done to a syncopated beat. It was popular among the native lower class Brazilians in the late 19th century. Another popular dance in the United States at the same time was the Maxixe, danced to ragtime music. The Maxixe basic movements were also derived from the same Batuque source: step, together, step was basic to both the Samba and the Maxixe. The Maxixe was popularized by Vernon and Irene Castle and codified in their book, Modern Dance, published in 1914. Veloz and Yolanda continued the performance of this vintage dance in their national dance tours of the 1940’s.

Another older dance form from the “Gay ’90’s” was the Cakewalk, performed to the Darktown Strutters’ Ball. The Cakewalk originated as the slaves mimicked their masters’ European dance forms and mores. Later it became a staple in the Minstrel Show of the 1840’s and performed as the “walkaround.” Still later, a version of the cakewalk or strut was danced in the Broadway musical “Chorus Line” to the tune of One. Even though many of the dances they performed drew from America’s Black heritage, their performances were not integrated. There were two unions in Los Angles at that time (1940’s) – A Black Musicians’ Union and White Musicians” Union later unified in the 1950’s.

The ballroom styles of Veloz and Yolanda were unique and they capitalized on this to become, as describe by Life Magazine editors, “The greatest dance couple in America.” They appeared on the magazine cover of October 30,1939. They also had the unique opportunity to perform in New York’s Carnegie Hall, and when in Las Vegas at the Flamingo Hotel the 3 Stooges’ performance was cancel to allow Veloz and Yolanda to perform. They were particularly noted for their interpretations of Latin Dance and popularized these forms for the American middle class and performed and popularized the Samba in the Columbia picture,Thrill of Brazil.

In an era,1940’s, when there were more ballroom dance teams than available ballrooms what made Veloz and Yolanda stand out? According to Elizabeth Talbot-Martin and William Teaford, who toured with them in the 40’s and 50’s, their uniqueness was “love.” Elizabeth Talbot-Martin, an early Lester Horton dancer and a satirist while on the tour, describes their warm-up. “Frank would walk up and down smoking a cigarette while Yolanda would do a couple of bends to each side. But the real warm-up was psychological. About 5 minutes before performance the area would be cleared so they could concentrate. She would think about dancing with each man, he would think about dancing with each woman in the audience and they revved themselves up with love. When they went on stage this love permeated them and the audience,” according to William Teaford, their musical director.

Elegant, smooth, and suave describes their performance along with elegant, gorgeous gowns, many designed by Veloz that revealed the great beauty of Yolanda. Veloz had his own unique manner of staying cool and suave – he had his dresser place the cardboard from his freshly cleaned and pressed shirts next to his chest to absorb the sweat.

The signature dance, which ended their dance concerts in the 1940’s and 50’s was a Tango written by Frank called Yolanda Tango. This dance epitomized their style and performance according to William Teaford and Elizabeth Talbot-Martin. “There was one lift that was truly spectacular – Frank would pick up Yolanda, spin her with her head down, then throw her out where she landed on one knee in a low lunge, back leg extended. They never did any thing acrobatic, but this lift was spectacular.”

The Tango is a dance from Argentina by way of Europe that became very popular from the turn of the century through the 1940‘s. It is characterized with the steps slow-slow- quick,quick – slow while being danced with great intensity and verve. Maurice and Florence Walton brought the Tango to the United States about 1907, the Castles popularized it, and Rudolf Valentino made his spectacular film debut in this dance of passion in the 1920’s. Again, the original dance was much more complex so it was simplified to meet the needs of the average white ballroom dancer. Veloz and Yolanda were not the average ballroom dancers so while their version appeared simple it was not. It was smooth, flowing, and beautiful, and every member of the audience was in rapture over their performance, recalled Elisabeth Talbot-Martin.

Another favorite dance was a Fox Trot done to the tune Whispering. “It brought the house down, according to Teaford. “Toward the end of the dance he would have me stop playing and ask the audience to hum, sing, or whistle the tune until the end of the dance.” The Fox Trot, another ubiquitous dance from about 1914, was popularized and developed if not invented by Vernon and Irene Castle. The Castle’s two Black musical directors, James Jesse Europe and Ford Dabny, wrote and arranged the music which helped to popularize this dance as well as The Castle Walk.

While the dances of Veloz and Yolanda may be attributed to other times, other places, and other people, their style was all their own – a unique blend of technique, attitude, beautiful costumes and manipulation, and their quality of “ being in love.” This togetherness extended to their private lives.

Frank and Yolanda met at a high school dance in New York City. They soon paired up and began entering dance contests, eventually winning the New York City and State Championship in 1927. They were married soon after and became professional dancers. At first they appeared in small New York night clubs then in the swankiest supper clubs of the 1930‘s, and finely appeared at the famed Chicago Palmer House followed by the Coconut Grove in Hollywood. As a result of their Grove appearance they were offered a movie contract appearing in several films: Honeymoon Lodge (Universal), The Cavalcade of Dance (Warner Bros.), The Pride of the Yankees (Goldwyn), and the afore mentioned Thrill of Brazil (Columbia). Frank Veloz also appeared in 1949 with Jean Davi – Yolanda was pregnant – on the first Academy of Television Arts and Sciences Awards at the Hollywood Athletic Club.

In the 1940’s they settled in Southern California. In 1942, 1944, and 1946 they performed in Dancing With The Stars at the Hollywood Bowl. Veloz and Yolanda with the Philharmonic Symphony Orchestra played to sold out audiences all three seasons receiving a special tribute in 1946 for attracting the largest audiences. (In the 1940’s the Bowl held about 1800 people.)

Frank and Yolanda were both Christian Scientist but she was the more committed. Elizabeth Talbot-Martin commented on her shyness off stage and the plain clothes she would wear when not performing because she felt “pretty clothes” were only for performance. She carried a knitted bag with her Bible and Mary Baker Eddy. Frank was very out going, a ladies man and definitely in command of the team and their engagements. His comment, “…and the woman should follow,” was apropos on stage as well as off. Yet their marriage seemed to be a reflection of their affection on stage. They had four children, three boys and a girl and seemed to be a happy couple. However, in the mid 1950’s when ballroom dancing began to die out and their schools closed their marriage also ended. Among the many contributions Veloz and Yolanda brought to ballroom dance was the recognition of dance as an art form to be presented on the concert stage. Their numerous tours brought an appreciation and recognition of ballroom dance as a social activity as well as an art form. Their schools upgraded the dance knowledge and ability of many during that period. The many “Rubies” who graduated enjoyed their dancing as much as the few “Diamonds.” Their TV shows and movies reached out to many more and encouraged a social dance craze that lasted until the advent of disco and the decline in partnering.

* This information is based on personal interviews via phone conversations between William Teaford and Elizabeth Talbot-Martin and Don Bondi. These phone interviews occurred between New York and Los Angeles 2 July 1983 and 8 July 1983