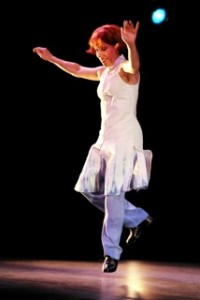 LINDA SOHL-ELLISON, Artistic Director and Choreographer for Rhapsody In Taps, performed with several modern dance companies before co-founding Rhapsody In Taps with Toni Tack in 1981. Based in Long Beach, California, Rhapsody In Taps is a company of seven-nine tap dancers, six musicians and guest artists who create and perform an original repertoire of innovative and traditional concert tap dance with live jazz, percussion and world music. Linda has a BFA from Ohio University in Dance and Graphic Design and an MA from UCLA in Choreography and Performance. Her training includes an extensive background in modern dance, ballet, jazz and studies under the great tap masters Foster Johnson, Eddie Brown, Honi Coles and Buster Brown. In 1990 she collaborated with tap dance legend, Gregory Hines, staging and performing his first choreographic work, “Toeing the 3rd and Fifth” which he created for Rhapsody In Taps.

A leader in the tap dance resurgence that began in the 1980s, Ms. Sohl-Ellison is recognized for her choreographic innovation. Deeply committed to a choreographic process that uses only live music, she has created a repertoire of more than 55 choreographies. Her experimental tap choreography includes the visually stunning “Nusantara/Bridge Between Islands,” a collaborative work with Balinese composer/musician/dancer I Nyoman Wenten and Rhapsody In Taps, fusing tap dance, Balinese inspired movement and gesture with live Balinese gamelan music. Ms. Sohl-Ellison has also created numerous tap/percussion collaborations with her husband, master percussionist Monti Ellison, including a series of duets that the two artists perform at home and on tour. Other non-traditional tap choreographies include Sohl-Ellison’s dramatic group piece set to Jewish klezmer music, “Laughing With Tears.” Russian composer and clarinet virtuoso, Leo Chelyapov composed music for this work that premiered to great acclaim in 2006 at Rhapsody In Taps’ 25th Anniversary celebration. Her large repertoire of percussion pieces have used bucket drumming, wooden drum sculptures, exotic instruments such as berimbau, hang drum, Indian tables, bells and vocals, and drummer Brent Lewis’s 22 chromatically tuned “Ikauma” drums. In addition to unconventional tap works, Ms. Sohl-Ellison has worked with big bands and great American jazz composers including Cedar Walton, Louie Bellson, Phil Wright, Al “Tootie” Heath and others.

Ms. Sohl-Ellison has been awarded five Choreographers’ Fellowships from the National Endowment for the Arts for her choreography. She has received three grants from the James Irvine Foundation: Irvine Fellowships in Dance (1999, 2001) and a Dance: Creation to Performance grant (2006), and has been awarded Artists Fellowships from the California Arts Council, Arts Council for Long Beach, Public Corporation for the Arts, a Monticello Fellowship from the National Association for Regional Ballet and a Brody Fellowship from the California Community Foundation for her choreography. In 1999 Ms. Sohl-Ellison was nominated for the prestigious Alpert Award in Dance. In 2006 she received a Lester Horton Dance Award for Outstanding Choreography – Long Form from the Dance Resource Center of Los Angeles. That same year Linda was honored with a Distinguished Alumni Award from Ohio University College of Fine Arts. In 2007 she and Rhapsody In Taps received a Milestone Award from the Los Angeles County Supervisors for 25 years of performances, leadership, service and arts presenting in Los Angeles. In 2010 she was awarded a Tapestry Award from Soul To Sole Tap Festival for 30 years of contributions to tap dance.

Rhapsody In Taps: has maintained annual Los Angeles Seasons at the Aratani Japan America in downtown Los Angeles or at Marsee Auditorium at El Camino College in Torrance since its beginnings. The company’s LA seasons and special choreography projects have been funded by the National Endowment for the Arts, City of Los Angeles Department of Cultural Affairs, the Los Angeles County Supervisors through the Los Angeles County Arts Commission, Target, Pitney Bowes and other organizations and individuals over the years. RIT’s annual children’s program for 4th -8th grade students bussed from LAUSD to the Aratani Japan America Theatre each October was funded by Panasonic Corporation for 13 years and with support from the LAUSD Arts Education Branch, the program continues to be an important service offered to LA Unified School District students and teachers. Linda was the founder and director of the Southern California Tap Festival from 1993 – 1997 and, with the support of RIT’s Board of Directors, she has produced six annual National Tap Day Celebrations at Occidental College and 16 annual NTD events at Center Stage Dance Academy in Long Beach. Using Rhapsody In Taps as a vehicle, she has been instrumental in creating recognition for Los Angeles tap dance masters through live performances, community awards, tribute projects and film presentations.

Linda’s film credits include appearances in “Tap” with Gregory Hines and Sammy Davis Jr., “Tap, the Tempo of America,” “Juba,” a televised documentary of Chicago’s 1998 Tap Festival, produced by the Human Rhythm Project and “THINKING ON THEIR FEET: Women of the Tap Renaissance,” a 2009 tap documentary directed by filmmaker Jenai Cutcher and Lynn Dally’s “You Gotta’ Move,” a documentary of the influential women in tap who performed at the 2008 Women In Tap Conference at UCLA.

Since 1978 Linda Sohl-Ellison has been a full time Professor of Dance at Orange Coast College where she teaches many dance forms, including classes in technique, choreography and pedagogy, directs the annual student dance concert and mentors dancers with professional career goals. After more than three decades of teaching at the college her commitment and dedication to aspiring artists continues; she is now teaching the dance students and children of her former students. Ms. Sohl-Ellison has toured throughout the United States, Asia, France, Germany, Bali Japan and Mexico teaching master classes, workshops and performing with Rhapsody In Taps, as a soloist or a duet repertoire with master percussionist Monti Ellison. She continues to enjoy sharing her passion for dance and choreography with artists and students from around the world.