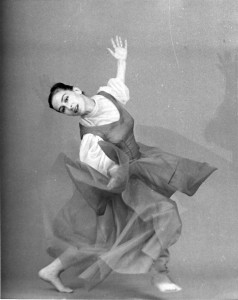 Gloria Newman  (15 July 1926 – 20 June 1992) was a native of New York City. She studied with the major dance pioneers of that period, including Martha Graham, Hanya Holm, Doris Humphrey, Jose Limon, Valerie Bettis, and Charles Weidman. However, Gloria acknowledged that those most influential in her development as an artist were Louis Horst, Merce Cunningham, and Katherine Litz.

Merce gave her a register in dance that is definitive without being dependent upon a special movement style, and represents more than physicality in dance.  Katherine impressed Gloria as being a dancer’s dancer. She had a wild sense of humor, yet a beautiful poetic quality that emerged in her choreography.  (This poetry and humor often appears in Gloria’s choreography).

Finally, and possibly most important were the three years she spent with Louis Horst.  Louis Horst was the first one to capture Gloria’s nascent choreographic talents. In formal terms he was the first to correlate dance structure with music and historical periods. He tied together their many elements to evolve dance.  He revealed the demands and use of discipline. In less formal terms, whole vistas of the relationships of art, music, literature, painting, and sculpture were opened to reveal, to broaden the panorama of art as an ideal and as a reality. For Gloria, “(her) understanding of structure, its various meanings, its purpose and application began with Louis Horst.”  But, as invaluable as this statement was for Gloria, even more important to her was the vision he gave to this evolving artist.

Certainly any one who studied with Gloria was struck by this influence even though they may not have known its source.  (Consider even the structure and intent of her first studio in Los Angeles – SARK studio with its multi-arts approach.)

Gloria’s interest in dance began while in high school when she attended a Martha Graham concert. This passion continued throughout her college career at New York University where she received her MA degree in dance. After graduation she taught dance at Cornell University, and then became co-chairman, along with Doris Rudko, at the New York High School for the Performing Arts Dance Department. Along with teaching and studying, she performed as a soloist with the Little Orchestra Society, as a guest artist at Cornell University Festival of Contemporary Arts, and choreographed for Equity Library Theatre, Stage for Dancers, and the Society of Illustrators.  In 1952 she became an audition winner at the Young Men’s Hebrew Association located at Lexington and 92nd Street in New York:  more commonly known as the “Y.”

Soon after, in 1954, she moved to Los Angeles, California. She began teaching “freestyle” (modern dance) and choreography at Eugene Loring’s American School of Dance in Hollywood, and also teaching at UCLA. She was an extremely popular teacher, influencing many students to attend her classes outside of the regular scheduled classes.   In 1956 she opened her own studio – SARK studio – where many students followed and continued to train with her.  Here in this multi-arts venue she began to develop her first dance company, “Gloria Newman Dance Company.“

Before opening the studio she married Charles “Bud” Schoenberg in 1955. Bud was a major factor and supporter in the new studio development including personally installing a beautiful sprung dance floor.  Later, this same dance floor was carefully removed in sections to be installed again section by section in the new studio in Anaheim.  (Part of a re-modeled industrial building complex.) This first studio was located on the corner of Robertson and National Boulevards in Los Angeles.

In 1958, she gave birth to her son, Jeff, which slowed her down a bit!  But, she continued to choreograph and teach. However, as a result of the birth, Gloria suffered a pinched nerve in her left shoulder somewhat affecting her arm movement and thus her dance. However, she continued to dance, but in 1965 it became for her untenable and she stopped performing.  Her last performance was the duet in  “Of Winds and Time” (commonly called by the dancers  “Harrison,” after the composer.)  Originally this duet was set for Bob Turk and Gloria, but Don Bondi assumed this role when Bob was injured.

However, this physical problem did not impair her creativity, her choreography, nor did it curtail her dynamic teaching. If anything she became even more dynamic since she could now concentrate more fully on the dancers’ performance.

With all this turmoil going on the studio also was in jeopardy. A new freeway, the 10, was projected to go right through the studio!  A new studio had to be found.  So SARK studio left Los Angeles in 1961 and moved to Anaheim in Orange County. There the company evolved and became “The Gloria Newman Dance Theater,” where it was soon to become recognized as the foremost dance company in Orange County. From this home base Gloria taught, produced, and performed throughout Los Angeles County and Orange County, and included national performance and guest artist tours across the United States.  For two summers (1967,1968) assisted by Carol Warner, Gloria taught and choreographed at the Robert Joffery Ballet School in Tacoma, Washington. To expand the company’s repertory she commissioned works from nationally known choreographers’ Donald Byrd (“Marches From American Stuff”), Elizabeth Keen (“Rushes” and “Parentheses”), Donald McKayle (“Games”), Anna Sokolow (“Rooms”), Betty Walberg (“Good Morning Mr. Snip, Snip, Snip”), Remy Charlip (“Four Twos and One Six”), and Daniel Nagrin (“Strange Hero”).

She began teaching in 1968 at California State University, Long Beach as a guest artist and later became a full time faculty member. In 1972 she closed SARK studio in Anaheim and because of her affiliation, the company became the resident dance company at Cal State, Long Beach. Now she had the freedom to be unencumbered with the responsibilities of a studio and have more time to work and rehearse the company. Of course this freedom had a price and that was to teach various dance classes for the University. The name SARK was no more, but the philosophy and the vision that Louis Horst instilled in a young dancer had reached a kind of fruition.

To keep abreast of the technological advances Gloria decide to enroll in a TV production class at Orange Coast College in 1967. There she hoped to learn new approaches in the use of space and how to present dance on TV.  And indeed she did. Confounding the teacher and other students Gloria decided to produce a short dance piece especially for  TV.  This she did with the aid of some of her dancers. Gloria choreographed, worked out camera angles, and produced her “TV Dance” much to the amazement of the instructor.  He did not expect a beginning student in a beginning class to attempt and succeed with such a complex assignment.  (Gloria got the A )

Through the years Gloria received many other “A’s” for her accomplishments. These included grant awards from Pacific-Bell for on-going development in choreography, several grants from the National Endowment for the Arts and from the California Arts Council, Plaudit Awards in 1980 and 1982 for “Meritorious Effort and Achievements in Teaching Dance,” the 1983 Foster Award for “Lifetime Achievement and Dedication to Dance in Southern California,” the 1984 honoree of The California Dance Educators’ Association for “Outstanding Contribution to Dance,” the 1985 Orange County Arts Alliance presentation for “Outstanding Contributions to Dance,” a commission in 1985 to produce “Carmina Burana” for the Orange County Master Chorale, and in 1986 she was awarded the “National Women of Achievement” honor from Rancho Santiago College.

Gloria in her own “pithy way” often used a phase to inspire, confuse, and challenge her students.  Here are some favorites to amuse, teach, and confound:  “Doing it on the other side makes you humble.”  “Don’t make accommodations.”  “Let your arms start from the tailbone.”  “You’re as square as a bean.”  “MOVE!”

In 1987 she celebrated the 25th anniversary of the company under the auspicious of the Los Angeles County High School for the Arts on the Campus of California State University, Los Angeles. (Don Bondi, former Newman dancer and dance chair at the high school for the arts, produced this performance.)

In 1992, Gloria Newman died after a lifetime of choreographing over 50 premiere dance works** for “The Gloria Newman Dance Theater,” inspiring/teaching hundreds of aspiring and professional dancers, and providing dance teachers/educators to many major and minor University, College, and Community College in Southern California and throughout the United States.  In addition, Gloria also found time to be Artist in Residence* (teaching and/or choreographing) at 17 different venues throughout the nation.

Gloria Newman was a beautiful lyric dancer, an inventive choreographer, an inspiring/demanding teacher, and a mother, wife, mentor, friend, confidant, and terrific cook.