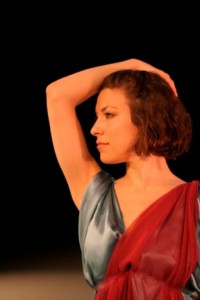 Elyssa Dru Rosenberg, the founder and director of isadoraNOW, is a choreographer, dancer and educator who recently relocated to San Diego from New York City, where she was a recognized Isadora Duncan teacher and scholar. Elyssa teaches master classes and workshops in Isadora Duncan’s technique and history at schools and universities throughout the United States including New York University, Tufts University, SUNY Purchase, and the University of California, San Diego. She has performed Isadora Duncan’s work with isadoraNOW, the Isadora Duncan Dance Company, and the Isadora Duncan Youth Ensemble, and has also been privileged to perform the choreography of Ben Munisteri, Fredrick Curry, Deborah Damast, and Daniel McCusker. Elyssa’s choreography and Isadora Duncan reconstructions have been presented at the Joyce SoHo, Symphony Space, the Peridance Salvatore Capezio Theater, Dance New Amsterdam, Manhattan Movement & Arts Center, Movement Research Center, the 92nd Street Y, and various cultural festivals. A fourth-generation Duncan dancer, Elyssa’s dancing has been described as “radiant” and “magnetic,” while her efforts to keep Isadora’s work relevant for a new generation have been praised as “refreshing.”

Elyssa holds a Masters in Dance and Dance Education from New York University and a Bachelors in Political Science from Tufts University. Her written work includes: “The Philosopher’s Dances: The Influence of Politics on Isadora Duncan’s Creative Process,” “Body, Mind, Spirit: Choreography by Duncan, Laban and Hawkins,” “A Call to Arms: Isadora Duncan’s Military Works.” She has presented papers about Isadora Duncan’s dances and history at conferences for the National Dance Education Organization and the Society of Dance History Scholars. She is a fourth generation Duncan dancer who studied Isadora Duncan’s work with Carrie-Ellen Tron, Patt Adams, Adrienne Ramm, and Lori Belilove.
Information provided by Elyssa Dru Rosenberg, 2014