Banafsheh Sayyad Dancer, Choreographer, Teacher, Artistic Director of NAMAH. Iranian-born sacred dancer and transformational teacher, Banafsheh communicates the universal message of Sufi mysticism in a passionate yet grounded and meditative way. Her dance is an interplay between trance and directed movement, precise yet abandoned, disciplined but unrestrained. She invokes the ancient roots of dance as ecstatic devotion and prayer while blazing a unique trail in contemporary dance through a masterly fusion of high level dance technique with profound spiritual embodiment.

“Watching Banafsheh dance is to glimpse something both otherworldly as well as fully grounded in the momentous meaning of the present.” ~ LA Yoga

Her mesmerizing honoring of the timeless Divine Feminine inside a contemporary gypsy dervish invites everyone to renew their passion for being alive. She is one of the few bearers of authentic Persian dance in the world, an innovator of Sufi movement previously only performed by men and a pioneer in contemporary mystical Persian dance. Internationally known for her innovative movement vocabulary and high artistic standards, she draws from her extensive background in Sufism, Persian dance, Flamenco, Tai Chi, Gurdjieff Movements and twenty five years of Whirling to present a new universal form rooted in tradition.

Her repertoire is comprised in part by the Persian alphabet she has translated into gestures and movement. When she puts these movements together she dances out words and poetic stanzas mostly taken from the works of the great mystic poet Rumi. Banafsheh comes from a long lineage of pioneering performing artists. Her father, the legendary Iranian filmmaker, theater director and actor, Parviz Sayyad is a legend in his own lifetime. Banafsheh is a recipient of the prestigious James Irvine Foundation grant in Choreography. She holds an MFA in Dance from UCLA where she taught Persian dance. Also a Doctor in Chinese Medicine, she draws from the Taoist view of the internal functioning of the body to uncover the healing structure and dimensions of movement. Banafsheh’s solo and ensemble work with her dance company NAMAH has been presented extensively in North America, Europe and Australia where she has gained tremendous audience and critical acclaim. She recently performed at the closing night of the Festival of Sacred Arts in Madrid at Teatros del Canal. Her dance film In the Fire of Grace with author and scholar, Andrew Harvey traces Rumi’s journey of the Soul in dance. 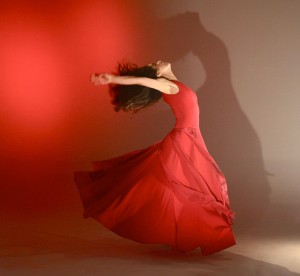 Banafsheh Sayyad during filming of In the Fire of Grace. Photo by Mehri Sahihi.

As a transformational teacher, Banafsheh’s teaching is considered “life changing”. She teaches her pioneering, self-illuminating, healing dance called Dance of Oneness® around the world, guiding people to find themselves and their inner truth through dance with coded postures and movements that enable them to transform themselves and live the sacred in everyday life. Banafsheh’s spiritual teachings through dance, movement and meditation are based in joyously embodying the transcendent in our everyday life leading to empowerment. “Love your body; love your Self, and live in the world as anembodied Lover – the Beloved’s beloved” are the elemental messages of Banafsheh’s work. Banafsheh teaches across North America, Europe and Turkey including Esalen Institute in California, Kripalu Center in Massachusetts, The Dance Center at Columbia College, Chicago, Menla Retreat Center and Omega Institute in NY and Hollyhock on Cortes Island, BC.

“As an embodied mystic of the divine feminine, Banafsheh’s presentations are not performances but transmissions which transform your vision of dance forever. Dancer and dance become one initiatory flame of grace.” Mystic and author of more than 30 books, Andrew Harvey