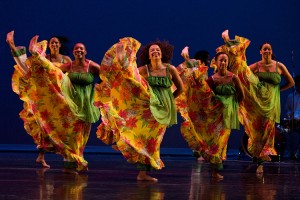 Viver Brasil, founded in 1997 by Linda Yudin and Luiz Badaró, is deeply rooted in the African heritage of Salvador, Bahia, Brazil, and embodies the beautiful and mythic stories of Afro-Brazilian culture. A full music ensemble and vivid costuming highlight Viver Brasil’s onstage jubilance, echoing the Directors’ vision of honoring Brazil’s African legacy through bold contemporary dance theater. As a Los Angeles-based dance company, Viver Brasil reflects the vitality of its global home and the artistic excellence and diversity of its company members. Through rigorous research and continuous dialogue with living masters and virtuoso musicians and choreographers in Bahia, Viver Brasil has garnered a reputation as the premier West Coast Brazilian dance organization. 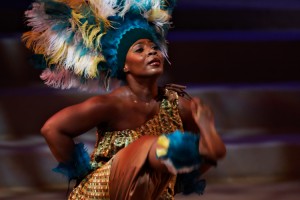 In 2010, the company was awarded the Lester Horton Dance Award for Outstanding Achievement in World Dance, in 2009 for best achievement in music for dance, and the directors for excellence in teaching, and the company and its members have been nominated in the categories of best achievement in female and male performance and costume design. Viver Brasil has also performed at the Hollywood Bowl, Walt Disney Concert Hall in Los Angeles; Lensic Performing Arts Center, NM; Herbst Theatre in San Francisco; Bergen Performing Arts Center, Newark, NJ; American Theatre, Hampton VA; National Hispanic Cultural Center, Albuquerque, NM; Taos Center for the Performing Arts, NM; and abroad in Mexico and Canada. The company has also been in residence at the University of Capetown, South Africa and many US universities and colleges. VB recently completed its 15th cultural immersion program to Salvador, Bahia. VB has received generous support from the New England Foundation for the Arts/National Dance Project, California Community Foundation, Durfee Foundation, Flourish Foundation, Harris Family Foundation, Los Angeles County Arts Commission, the City of Los Angeles Department of Cultural Affairs, and the Los Angeles Dance Advance Initiative.

Viver Brasil is committed to increasing awareness of the rich history of Afro-Brazilian dance and music through performances, residencies and interactive workshops that engage a variety of communities from youth to adults and seniors. Viver Brasil’s arts education programs also include lectures on Afro-Brazilian culture and history and setting choreography on student ensembles.