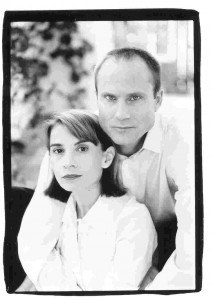 The art of Jackie Planeix and Tom Crocker is to share with others the passionate dialogue that has shaped their lives and defined their mission: the value of lifelong learning through the arts. The two artists met in Brussels at MUDRA, the interdisciplinary performing arts institute directed by French choreographer Maurice Béjart. As members of Mr. Béjart’s renowned dance company, Jackie and Tom then toured the world, performing at theaters such as the Bolshoi in Moscow, La Scala in Milan, and Comédie Française in Paris. In addition to the Ballet Béjart, Jackie and Tom danced with the Ballet du Grand Théâtre de Genève.

Jackie and Tom founded their own company, Bluepalm, in Geneva, Switzerland. In the late 1980s and through the 90s, Bluepalm performed in some of the most influential contemporary venues including the Centre Pompidou, Maison de la Danse (Lyon), Centre National de Danse Contemporaine (Angers), P.S. 122 (New York), Wallenboyd Theater (Los Angeles). In their award-winning production, ‘DANCE TALKS!’, Bluepalm expressed the soul of the dancer through movement and incantatory, bilingual poems: effective, engaged, and inspired language became a hallmark of Bluepalm’s work. Shifting its base to North America, Bluepalm led residencies in interdisciplinary performance techniques in universities, including Philadelphia College of the Arts, York University (Toronto) and the Centre National de Danse Contemporaine (Angers): while helping young artists to forge a voice of their own, Planeix and Crocker developed innovative strategies that blend professional and personal development. In Southern California, they created original pieces, including ‘Cocteau in California’, ‘Childhood’, and ‘Millennium Stories’, and became vital partners in the nurturing of young performers through relationships with institutions such as the California Arts Council, CAL State Los Angeles, Barnsdall Gallery Theater, Moorpark College, UC Riverside, Los Angeles County High School for the Arts, Loyola Marymount University, USC, and CalArts. 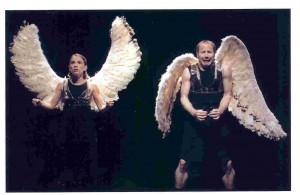 The birth of daughter Madeleine – whose first performance, at nine month of age, took place at the Dance Kaleidoscope Festival, on the CAL State Los Angeles campus – shifted Jackie and Tom’s creative focus to arts education. By posing central questions, ‘Who am I?’ and ‘What are the links between learning and the artistic process?’, Bluepalm placed art at the center of learning in classrooms K-16. With funding from the National Endowment for the Arts, California Arts Council, County and City of Los Angeles, LAUSD, and the Dana and Thelma Pearl Howard Foundations, as well as certification from the French Ministère de la Culture, Bluepalm established itself as a leader in arts integration. Partnerships such as those with the Neuroscience and French Departments at USC and the National Choreographic Center in Rillieux-la-Pape (France) have provided Bluepalm the opportunity to further develop innovative techniques to improve performance, communication, and creativity.

Today, Bluepalm’s driving premise, ‘Think like an artist’, has grown to encompass all members of working and learning communities. Jackie Planeix and Tom Crocker apply the gifts they have received from a life in the arts, in the service of individuals and organizations. Their journey continues… in and through art.