Thais Leavitt is a native Californian who studied ballet with Don Hewitt, Joey Harris, Stanley Holden and Spanish dance with Lola Montes. In 1973 she entered the Royal Ballet School in London. She performed with the opera and ballet in Covent Garden and with Sadler’s Wells Ballet. 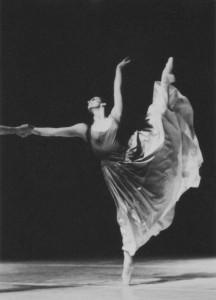 In 1975, she joined the Dortmund Opera Ballet in Germany. Leavitt became a Demi- Soloist with the Lubeck Opera Ballet in 1976, dancing in classics such as Swan Lake, La Sylphide, and Giselle. Since 1977 she was a Principal Dancer with the Dusseldorf Opera Ballet, performing in ballets by Agnes de Mille, Balanchine, Erich Walter and others.

In addition, Leavitt has guested and toured in France, Spain and Italy, and performed in the Arts Festival in Florence, Italy. In several European tours, she has partnered Paolo Bortoluzzi renowned for his performances in Bejart’s Les Ballets du XXme Siecle.

In 1985 she performed in Los Angeles at the John Anson Ford “Dance Park Festival” produced by LAADA. She was partnered by Richard Fein (Elliot Feld Co, Frankfurt Ballet) who had also trained in Los Angeles with Leavitt. Reviews stated:

Returning to the United States on a permanent basis, Ms. Leavitt was invited to joined the Dance Faculty of the Los Angeles County High School of the Arts. In addition to technique, she often exercises her knowledge of classic and contemporary repertoire to recreate works for performances. She has studied Cecchetti (Italian), Vaganova, (Russian) and Bournonville (Danish) methods of training as well as Spanish dance. She is a popular and effective guest artist and coach throughout the southern California area.