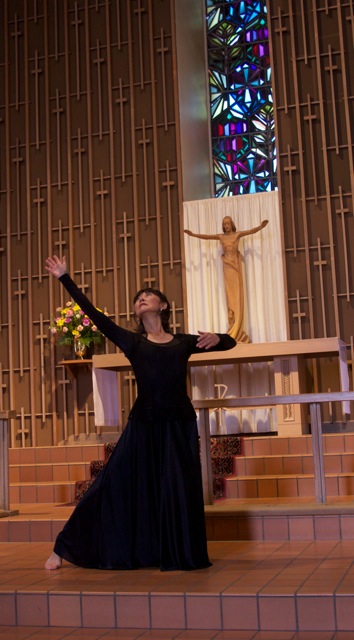 It was as a very young child, during WWII, in the concentration camps of Poston, AZ, where my family and I were interned, that I first saw a tap dance to “Don’t Sit Under the Apple Tree” and fell in love with dance. I knew at that moment, as a 5 year old, that I would always dance. Three years later, we were allowed to return to Los Angeles. Finally at the age of 9, my parents signed me up for classes at West Coast Dance Studio, a small community dance studio. I studied ballet, tap, acrobatic and free style with Elizabeth Gellman who had performed with the Metropolitan Ballet Company.

I had planned to go to USC and become a dental hygienist. My plans changed when my father, a dentist who also taught for USC died suddenly in 1952. My mother encouraged me to go into education instead. So I went to UCLA, where I majored in physical education with a special emphasis in dance (there was no dance major at that time) and graduated in 1958. My principal teachers were Carol Scothorn and Dr. Alma Hawkins who eventually started the dance major. There I discovered “modern dance” and choreography. I loved moving across the space to the sounds that Clarence Bernard (“Jack”) Jackson played on the piano. It was so exciting getting to perform in Royce Hall and having music created for my dance. The dancers were featured in articles in the L.A. Times, Impulse magazine and even in LIFE magazine! My first dance was to be one of the witches from Macbeth, choreographed by Elizabeth Greenhut Ince.

Everyone was taking classes at a nearby studio—SARK Studios, with Gloria Newman. It wasn’t until I graduated that I ventured into her studio. Gloria’s classes were difficult and I found myself in tears after every class. She demanded much but I knew she offered exactly what I needed to grow. She soon invited me to join the Gloria Newman Dance Theater and for 12 years, I was a principal dancer in her Company.

Taking 2 classes at least 3 times a week, rehearsing until past midnight, soon became the standard routine. At the time, I was teaching physical education and dance at San Gabriel High School, which meant I was driving 75 miles to the studio in Venice and back.

Then SARK Studio relocated to Anaheim, and the Matsudas relocated to the West Los Angeles area (wouldn’t you know it?) so husband Hisashi could attend UCLA. So now it meant driving those many miles but in the opposite direction. During this time, Dr. Hawkins invited me to teach a modern dance class through UCLA Extension and I had Ellen Sinatra for my dance musician.

Even through pregnancy and the birth of my son, Bradley, I continued to dance, rehearse, perform and teach master classes for various colleges. Moving to West Covina after my husband’s graduation, I drove over Brea Canyon to the studio, with now two toddlers (Colleen, 2 years old and Brad, now 4). Nothing deterred my desire to continue dancing for Gloria. It meant having all the housework finished, traveling with the children, putting them in play pens while I danced, coming back home, feeding them, bathing them and then feeding my husband. It meant early mornings and late nights (without complaining!). Beth Spicer, who helped Gloria with costuming and also taught at Mt. SAC would sometimes pick up the children and watch them for me. What a God-send she was.

But being able to dance and share my life with Carol Warner, Don Bondi, June Tsukida Watanabe, Richard Oliver, Claudia Hood Chapin, Ruth Miyano Beadles, Pauline Kutansky Sugine, Shawn Curry, Jean Pyatt, Pamela Marlow, Sachiye Nakano, JoElla Lewis, Lynn Rempalski, Barbara Dobkins, and all the many other dancers who came into the company near the end of my career enriched my life. This was my dance family and it was difficult to leave them. But now I was living in Thousand Oaks and had sustained a knee injury. Along with having my third child, Scott, I knew it was time.

In 1972, Alma Hawkins called me back to UCLA to teach dance to the sophomore class along with Gary Bates, and later to the juniors and seniors. I also started teaching dance part time for California Lutheran College (now University) and Moorpark College.

I became a full time professor at Moorpark College in 1980, where I taught modern, choreography, jazz dance, ballet, and tap and was in charge of all the dance productions. We formed “In Motion Dance Theater” and also created a children’s dance company, which would, each season, tour 50 schools in the area. The dancers learned to dance in any venue and situation. We brought in many guest artists to teach and perform: Robert Small, Gloria Newman, Don Bondi, Mehmet Sanders, June Watanabe, John Pennington, Thais Levitt, Linda Gold, Donald Byrd, Ramaa Bharadvaj, tap dancers Arthur Duncan and Sam Weber as well as Greg Mitchell from Eliot Feld’s company, Vanoye Aikens who danced with Katherine Dunham plus many other master teachers. The part time faculty was excellent: Renebaum, Margaret Hyun, Donald Hewitt, Dennon and Sayhber Rawles, Iris Pell, Pamela Bramhall and Gloria Bowen. Moorpark College soon had a reputation as one of the outstanding colleges in the area. The program went from a P.E. program into Fine Arts, with a dance major, a new performing arts building with a theatre and studio. Honoring Betty Wahlberg’s life with a full concert was one of the most fulfilling events. Bringing in guest artists, especially the Gloria Newman Dance Theater, who had worked closely with Betty was exciting for the dancers to experience as well as the community.  Betty worked with Jerome Robbins, who sent a telegram honoring her for the event.

In 1977, I founded and directed Alleluia Dance Theater, a Sacred Dance Company. For over 35 years now, it has been my joy and privilege to bring dance as a form of worship to others whether in a workshop or retreat setting, in church, as part of a festival celebration, or to community organizations and convalescent homes. Through the Company, I have taught, performed, choreographed and lectured as the keynote speaker throughout the United States (including Hawaii) and Canada. For the past 27 years, we have also presented a Wholistic Retreat for Women.

I have served as both vice president and president of Sacred Dance Guild, an international interfaith organization, established in 1958, to promote sacred dance for one’s own personal devotion and prayer as well as to connect with the community who hold dance as a sacred art and a path to the Divine. I have basically represented the local Southern CA chapter since its inception. I have taught and performed during the Festivals that take place in various parts of the country. In 2003, as chairperson for Festival, the So CA SDG committee and I created an exciting and successful event, held at Claremont College. The concert featured faculty John Pennington, Ramaa Bharadvaj, John West, Moonea Choi, and Don Bondi.

With Don Bondi, we choreographed a dance for Hospice, entitled “Dance of Sorrow” which was performed throughout California: San Francisco, Los Angeles, and down to San Diego. Through this dance, we were able to help those who work with death and dying and whose lives were touched by Hospice to connect deeply into their emotional state.

Another dance, “Triptych” looked at how various groups of people were affected by various events in history: the Native American, the Polish Jew during the Holocaust, and the Japanese American. The first two were choreographed and performed by Don Bondi and the third was choreographed by Don and Stella and performed by Stella. We were invited to perform in 1989, at the Edinburgh festival in Scotland and later at USC, LACHS for the Arts and Moorpark College. Stella continued to perform her section for many organizations, especially the Peace and Justice community in Los Angeles.

After retirement in 1997, I became involved in tai chi and qi gong. I now teach 5 Tai-Chi classes and 3 dance classes for the local community of Thousand Oaks and Westlake Village.