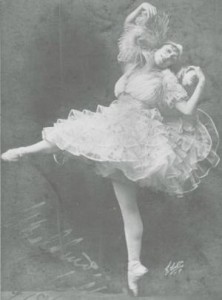 Alexandra Baldina. Baldina gifted this photo to student Dorothy Tyne, and it now belongs to granddaughter Susan Tyne, a Grades Examiner at the Royal Academy of Dance.

Madam Alexandra Baldina (1885-1977) was a renowned Russian ballerina. She was born in St. Petersburg and began her early training with the Imperial Ballet. In 1903 she graduated and joined the Mariinsky Ballet, and in 1905 she was transferred to the Bolshoi Ballet in Moscow. At the Bolshoi she danced principle roles in Petipa’s Esmeralda and Ivanov’s Nutcracker. In 1910 she left the Bolshoi Ballet and Russia. On June 2nd, 1909, she danced in the premiere of Les Sylphides at Théâtre du Châtelet in Paris with Diaghilev’s Les Ballet Russes.  She went on to join Diaghilev’s Ballet Russe, and during that time she married husband Theodore Kosloff, who had impregnated her. While dancing with Les Ballet Russes, Baldina was also a principal dancer in Le Pavillon d’Armide (premiered May, 1909). After the Ballet Russe period, Baldina immigrated to the United States. Baldina and Kosloff’s marriage did not last. Estranged from her husband, she settled in San Francisco where she taught.