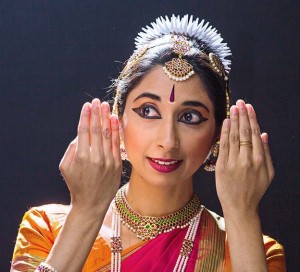 Lakshmi Iyengar, a Bharatanatyam dancer is the disciple of guru Narmada, Malathi Iyengar, & Bragha Bessell. Lakshmi has performed extensively all over the USA, Canada, and India, including the December music and dance festival season in Chennai and Bangalore. As a lead dancer for the Rangoli Dance Company, she has performed in all choreographic works of Malathi Iyengar. Lakshmi, a recipient of the Alliance for California Traditional Artists 2004 Award, has received multiple Lester Horton dance award nominations for outstanding achievement in Performance. With over two decades of dance experience and training in film and video production, Lakshmi has been a production designer for Rangoli productions since 2001. Lakshmi has a Masters in Entertainment Industry Management from the Carnegie Mellon University and a B.A. in Theater (Production Design) and Italian from the University of California, Los Angeles. Lakshmi has studied Italian literature and theater at the Universita’ di Bologna, Italy and worked for the Cineteca di Bologna. Lakshmi is a coordinator for Worldwide Acquisitions, Universal Pictures.