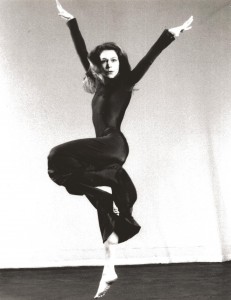 Irene Feigenheimer is a nationally recognized teacher, choreographer and dancer. Her choreography has received critical acclaim in the New York Times, Dance Magazine and the Washington Post, among other publications. She has received numerous grants from the National Endowment for the Arts and the New York State Council on the Arts.

She has taught dance and choreography at over twenty major universities in the United States including the Juilliard School, Sarah Lawrence College, The University of Illinois, Dartmouth College and Cal Institute for the Arts. Irene was a full time professor for four years at Manhattanville College in New York.

Since 1973, Irene has been the Artistic Director and choreographer of her own company, DANCEMOVES. She has performed with numerous companies including the Metropolitan Opera Ballet, the Anna Sokolow Dance Company, the Cliff Keuter Dance Company, the Phyllis Lamhut Company and for 9 years was a soloist with the Don Redlich Dance Company.

Irene’s career also involved her in the theatre world. Besides teaching movement for actors at the Stella Adler Studio in New York, she also had an ongoing affiliation with the Trinity Square Repertory Conservatory in Providence, Rhode Island. She choreographed productions of GREASE, FIDDLER ON THE ROOF and THE BOYS NEXT STORE. Irene was the choreographer for a workshop production of David Saperstein’s (COCOON) BLUE PLANET BLUE, in New York.

Since relocating to Los Angeles in 1993, Irene has been on the faculties of California Institute for the Arts, Cal State Long Beach, the American Dance Institute and currently teaches at Anisa’s School of Dance and at Desert Dance Academy in Palm Springs.

From 1997-1999 Irene was the Managing Director of the dance service organization Dance Resource Center of Los Angeles. She has also been a guest artist with Rosanna Gamson/World Wide since 1998. In August, 2001 she was commissioned by the Alex Theatre, Glendale, to create a new work for their dance festival. The cast was John Diaz, Irene Feigenheimer, Karen Goodman, Nicholas Gunn, Lisa K. Lock, Erin Maxick, Johnny Tu and L. Martina Young. Beginning in 2005 she was a guest choreographer for two seasons with the L.A.-based Oxford Street Dance Co.

For the past 5 years, she has been on the selection committee and a judge for the annual Choreography Festival at the McCallum Theatre in Palm Desert.