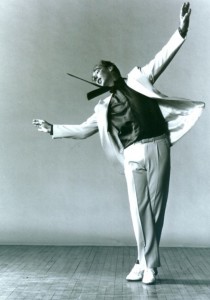 My current activities as a dancer, choreographer and teacher are a continuation of my professional work, which began nationally in 1961, when I danced in summer stock in New England, and internationally in 1966, when I performed in Greenland, Iceland and Canada.  In the 40-plus years since, I have performed as a modern dancer and a tap dancer throughout the United States in more than a dozen national tours, including concerts at the American Dance Festival and Jacob’s Pillow Dance Festival; at the Kennedy Center and for the Smithsonian Institution in Washington, at Dance Theatre Workshop, City Center and Lincoln Center in New York City, and in five national/international tap dance festivals in the United States.   As a tap dancer, I have also appeared as a soloist in the Great Performances series, Dance in America.

As a soloist with orchestras, I have performed my choreographic version of American composer Morton Gould’s Tap Dance Concerto with the New York Philharmonic, the Cleveland Orchestra, the Pittsburgh Symphony, the Houston Symphony,  the Puerto Rico Symphony,  and regional orchestras throughout the country.  Currently, there are only two other tap dancers –Sam Weber and Lane Alexander — performing their versions of this concerto.  In 1996, I successfully proposed to the Long Beach Symphony that the three of us perform the piece together, which had never been done before.  In 2001, I performed with in Washington, D.C., with the National Symphony in a concert at the National Mall in front of the U.S. Capitol for an audience of 70,000.

Internationally, I have danced in Belgium, and Austria with the Bella Lewitzky Dance Company, when I was a modern dancer. In the Netherlands, I performed the “Tap Dance Concerto”, and in France, I performed in Paris with the Lewitzky Company at Theatre de Ville.  With the Jazz Tap Ensemble, I also danced at Theatre de Ville, at Maison de la Danse in Lyon and in numerous other French theaters.   In England, I danced with the Jazz Tap Ensemble in a series of live concerts that were filmed for the Channel 4 Television documentary, Jazz Tap Ensemble, USA!   In 1984, the State Department’s United States Information Agency, a division of the State Department, invited the Jazz Tap Ensemble to serve as cultural ambassadors from our country in a series of concerts in the Philippines, Thailand, Malaysia and Indonesia.  In 2002, I danced in Bali with Rhapsody in Taps and I Nyoman Wenten’s American gamelan ensemble, then taught workshops in Tokyo.  The following year, I returned to Tokyo for a week of tap workshops and a concert of solo works. 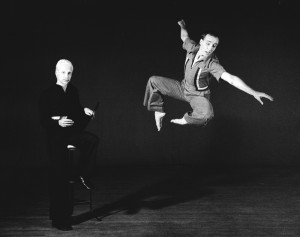 As a choreographer, I have consistently produced choreography in modern dance and, since 1977, in tap dance genres.  Three of my early modern dance works were included in the repertory of the Bella Lewitzky Dance Company for its national and international tours.  My works for the Jazz Tap Ensemble have been seen worldwide.   At summer tap dance festivals in  Chicago, Portland, Southern California and Boulder, Colorado, where the largest collection of professional and aspiring professional tap dancers congregated in the ‘80s and ‘90s,  I have presented my dances, both as a soloist and with my company, Fred Strickler & Friends—New Ideas on Tap, alongside the works of tap artists who are generally recognized to be to the best in the world.

Several of my dances have been included in the repertories of Manhattan Tap and Rhapsody in Taps.  Over the years, solo tap artists have also commissioned dances from me, including Heather Cornell (New York), Peggy Spina (New York), Lane Alexander (Chicago), Bill Evans (Albuquerque), Janet Descutner (Eugene) and Carol Efron Flier (Boston).  In modern dance,  the San Francisco based solo artist Jeff Friedman commissioned a new work by me, and ballerina Victoria Koenig commissioned a modern ballet duet that we performed together in a series of concerts with the Los Angeles Chamber Ballet.

In 1995, in recognition of my body of work,  the Center for Ideas and Society at the University of California chose me as the first artist to receive the Distinguished Humanities Research Award.  In 1990, I was among the first five California dance artists to receive an Artist Fellowship from the California Arts Council.   My record of grants and fellowships includes seven Choreographers Fellowships from the National Endowment for the Arts.

As a producer of dance events, I’ve been interested in presenting the choreography of other tap dancers.  In the context of concerts of Fred Strickler & Friends, I invited artists Linda Sohl-Donnell and her company Rhapsody in Taps, to share a concert with me at Occidental College (Los Angeles), and in New York,   I produced/curated Tap Blast !, which included Manhattan Tap, the postmodern tap soloist Anita Feldman and vaudevillian tap master Charles ‘Cookie’ Cook, in a concert for 5,000 tap dance enthusiasts at the Lincoln Center Out-of-Doors Festival in 1989.

Wherever I have performed as a dancer, I have been invited to teach master classes and/or workshops, in modern dance and/or in tap.   I’ve taught just about everything related to techniques, approaches to choreography and improvisation, performance and production in classes, courses and workshops in all kinds of places, including  public schools, private studios, high schools, colleges and universities, teacher training workshops, and major dance festivals. It has been especially  in these festivals that I believe my influence on the thinking and understanding of the next generation of tap dancer-choreographers has occurred.   Because I have worked with so many young artists of generally strong capabilities, I have been able to develop pedagogical principles that seem to be effective in  helping them to develop their own artistic —  especially, choreographic —  “voices”.  It remains to be seen what those influences will produce in the field over the next several years, precisely because, as an art form, tap dance is still quite young.

At the University of California, Riverside, I was responsible from 1967 through the late 1980’s for the development of the composition/technique and performance undergraduate curriculum in dance, in partnership with the founder of the Department of Dance, Christena Schlundt.

In the arena of public service, I have very much enjoyed my activities as a grants panelist for the National Endowment for the Arts and the California Arts Council, in particular, as well as serving on panels and juries for the Western States Arts Foundation, the Houston Arts Council and the Nevada Arts Council.

One advantage of dancing around the world for more than fifty years is that one’s experiences result in a lot of stories.  At the request of dance historian Lisbeth Langston, I did a series of oral history interviews from 2004 – 2007, focusing on my life in dance.  We also videotaped some of my pieces.  The 2004 interviews have been transcribed and edited, and the rest is in progress.  Eventually, all of the materials will be available in the archives of the Dance Collection of the New York Public Library, the U.C. Riverside Library, and The Ohio State University Library.