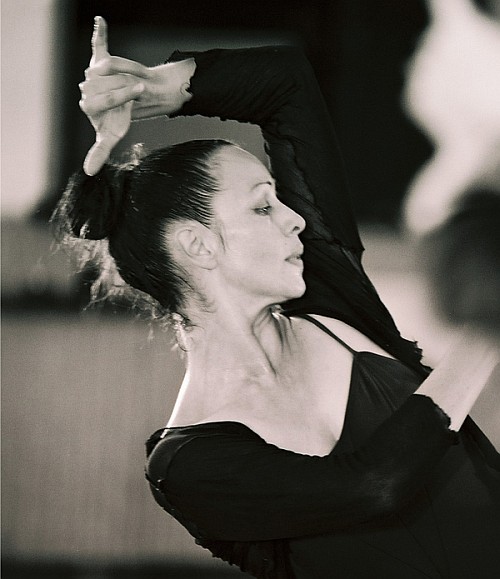 Born in London and trained in New York, Deborah Greenfield arrived in LA in 1995, to spend several creative years there as a dancer, choreographer and teacher. Her choreographic and performing work has spanned film, theatre and concert productions and crossed between contemporary dance, ballet and flamenco. Previous to her arrival in LA Deborah’s modern dance company, FUGA, was founded after her piece Fuego Quieto (Still Fire) won 1st Prize at the V Madrid Choreography Competition. FUGA went on to appear at Seville’s  WORLD EXPO’92 and toured Europe’s festival circuit to much critical acclaim.

In 1999 in Los Angeles Deborah choreographed and performed in the feature films “Camera Obscura”, starring Spanish actress Ariadna Gil as well as a series of short dance films, some of which have been screened at international dance film festivals. For the past several years Deborah has focussed her creative energy on incorporating flamenco dance into her work in experimental ways under the company name of Rosa Negra. Diverse projects have included concerts, at the Hollywood Bowl and with the LA Philharmonic. In 2003-04 “Madrugada”, a multimedia theatre production  based on Bram Stoker’s Dracula, was created with a COLA fellowship from the City of Los Angeles and in 2004-06 the project, Diálogos, was supported by a grant from Dance USA. In this last, various ways of melding flamenco and modern dance were explored. In 2009 Deborah relocated to Paris, where she created the dance-theatre piece La Hermanas Tres, inspired by Chekhov’s Three Sisters, in collaboration with actress-choreographer Yana Maizel.

As a teacher Deborah has taught courses and master classes on both sides of the Atlantic at  universities and schools such as The London Contemporary Dance School in London, New York’s  LaGuardia High School of the Performing Arts (of “Fame”), Seville’s Royal Conservatory of  Dance and Theatre Institute of Andalucia, and the University of Alcalá de Henares in Madrid. In Los Angeles she was a flamenco dance teaching artist for the Music Center of LA’s arts education programs for many years bringing a taste of flamenco dance to countless school children.

Current plans include a return to the US, to High Cove community near Asheville, NC. Here she will be a key player in the development of High Cove Institute, dedicated to arts activities and arts-science collaborations featuring movement and dance.