Excerpts from “Moving Out of the Frame”, a memoir by Claudia Chapline

DANCING IN LOS ANGELES
WITH GLORIA NEWMAN AND CARMELITA MARACCI 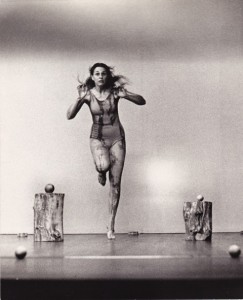 To me, dance is the most difficult of the arts. It demands daily classes to maintain and develop skills with an ever-changing instrument – the body. In Los Angeles I first took modern dance classes with Gloria Newman and performed with her company from 1957 to 1959. Gloria’s classes were technically challenging and I met new friends there. I met Richard Oliver who invited me to join his new company. I also met Don Bondi in Gloria Newman’s classes. He performed in some of my works and also collected my art. My favorite accompanist was Clarence Jackson who was deeply involved with the Inner City Cultural Center. Gloria’s choreography was dramatically based and emphasized characters and emotions. In her choreography class I developed Journey, a very success-ful solo with a bamboo pole in response to an assignment to create a dance with a prop. After that I created many dances and art performances with props such as ropes or bamboo and events with wool, paper, silk and other fibers.

When Gloria moved her studio to Anaheim I carpooled with Stella Matsuda. One time when I was driving back from class I realized that I had moved over several lanes without awareness. It was time to stop that dangerous commute. I was exhausted from teaching dance to support the family, taking care of my infant son and trying to keep up with my own dance needs.

During the years I was a stay at home mom after my second son was born in 1964, I kept up my dance skills by taking ballet classes with Carmelita Maracci. Carmelita’s back had been broken when she fell backwards into an orchestra pit, ending a successful performing career. Her husband Lee Freeson, one of the nicest people you could meet, drove her to the studio building where she laboriously climbed up the stairs to the second floor. At that time I could not resist running up stairs. I would stop when I came to Carmelita and walk slowly with her but she urged me on so I wouldn’t be late. I quickly changed and took my place at the barre. I was recovering from a hysterectomy and felt awkward from the imposed inactivity after the surgery. Carmelita sat in a chair, yelling at us or talking politics. She often had a favorite in the class who later became the person she picked on. At one time it was Susie Heldfond, who was a movie actress. I knew that when my turn came I would leave. My tension showed up in my hands. Carmelita said they looked like claws.

On the other hand, Carmelita was most generous. She brought wonderful gifts from her collections. I have a Peruvian silver scarf pin from one of those days. I shared the lettuce and beets that I grew in my garden with her and the class. I always had more than my family could eat.

One day I noticed that I was bumping into the walls and furniture at home. Thinking something must be wrong with my eyes, I went to the optometrist who discovered that I had corneal edema. This was because I had been prescribed estrogen after the hysterectomy. Estrogen caused the corneas to hold water under my hard contact lenses. I stopped taking the estrogen and wearing the contact lenses until my eyes healed. I had to wear old glasses to get around. The only ones I had were a dark green and cracked pair of thick sunglasses.

There was no public transportation in Los Angeles then and I didn’t dare drive with such low vision. Carmelita thought this was no excuse for not coming to ballet class. She thought one of the other students could drive me. But my house was out of the way for any of the other students. During this time of feeling dependent on others to help me, I began to understand the feelings of people who are unable to fully participate in the activities that everyone else is engaged in. And I understood the source of Carmelita’s frequent rages. One never knew what would set her off. After several weeks, my eyes had healed and I was able to wear my contact lenses again and return to Carmelita’s classes. But it was now my turn to be the scapegoat. Then I stopped going to her ballet classes because my muscles tightened up fin response to her harassment.