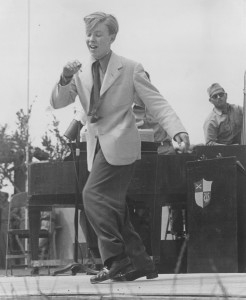 Bob  Scheerer was born near Santa Barbara, California on December 28,1928.

Six years later, now in San Bernardino, his parents saw a local talent show that included a neighbor’s son tap dancing.  Bob’s mother was impressed and said, “Bobby should do that too.” Father said “I’m not so sure he could.”  The next day he was in tap class.

Lessons continued and the family moved to the Los Angeles area, where Bob studied with Steve Granger at Maury Rubens Musical Workshop in Hollywood. At age 12, he auditioned for Fred Astaire for a tapping bit in “Holiday Inn”. (He didn’t get it.)  Many years later, Bob directed Astaire’s last dancing TV special. (No, Bob didn’t mention the audition 50 years earlier.)

At age 13, Bob was put under contract at Universal Studios, and was put in a group called The Jivin’ Jack and Jills that featured Donald O’Connor and Peggy Ryan. Bob danced in twelve feature films, ten of which were choreographed (it was called Dance Director then) by Louis DaPron who became an important dance figure in Bob’s life.

At age 18, in Hollywood, Bob was featured in a show called “Lend An Ear” that was so successful it was moved to Broadway.  After that came “Dance Me A Song”, in which he performed a dance with Cliff Ferre and Bob Fosse.  That same year, he performed in Top Banana with Phil Silvers .  Bob was also sang “My Home is In My Shoes” in that show.

Following that, he spent two years in the army.

In 1954 he was cast as Bobby Van Huesen (“Won’t You Charleston With Me”) in The Boy Friend with Julie Andrews on Broadway.  Afterward, Bob didn’t want to tour with the show, and instead took a job as a Production Assistant to learn about television and finally worked his way up to Director, then Producer, as well.  Bob directed and/or produced numerous television show and variety specials, including shows for Andy Williams, Perry Como, Spike Jones, Shirley MacLaine, Fred Astaire, Barbra Streisand in Central Park and Frank Sinatra (with Ella Fitzgerald and Jobim) and the opening of  Disney World in Florida.  He received an Emmy for Best Director in 1983 for The Danny Kaye Show.

He also directed many series shows including The Love Boat, Matlock, Fame, and

with Michael Douglas, Disney’s The World’s Greatest Athlete, and How To Beat the High Cost Of Living.

Bob is now retired and living with his wife Denise in Valley Village, California.