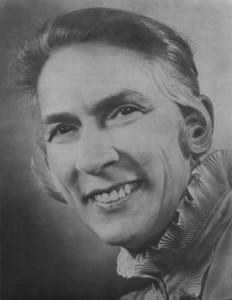 Betty was born in Raymond, Alberta, Canada, the daughter of N. Lorenzo and Martha Mitchell. Not until Betty was six (1931) did her family move to Salt Lake City where her father, a musician and composer, became the conductor of the South High School Band and eventually the Director of the McCune School of Music.

Betty’s education in classical and operatic music began early, as did her training as a dramatic soprano and her participation in a number of choral groups, including the Mormon Tabernacle Choir.

When, during her teen years, her voice teacher felt that she required more sophisticated voice training, she moved to Chicago. Until the end of World War 11, that is where she continued her training. Shortly after the termination of the war, however, her father prevailed upon her to go to war-torn England in behalf of the Mormon Church. Indeed, her singing was relatively unique there and much in demand. Furthermore, it was in England where she first met an ex-GI who played the violin and who accompanied her in performance whenever possible.

Later, after both had returned from England in 1949, they were married. Unfortunately, this union meant that further musical training for Betty came to an end because she was engaged in helping to support her husband’s pursuit of his Ph D. Worse still, thyroid problems for Betty led to a throat operation that so damaged her voice that the perfectionist in her would not allow her to sing in public. Indeed, she never sang again.

Eventually, in 1963, Betty and her family moved to Los Angeles where her husband, Lamar, had become a faculty member at USC. As their family grew-2 girls and 2 boys-they sought ballet training for the girls and were guided by some knowledgeable friends to Irina Kosmovska. She was a former dancer with the Ballet Russe and a disciple of George Balanchine. The training was rigorous and eventually led to a stable of young dancers who, for their ages, were promising performers. The result was the formation of the Los Angeles Junior Ballet which, eventually, Betty led.

Funds were raised and theaters booked for several Junior Ballet performances. Several dancers received tuitions for their training from The School of American Ballet as well as summer scholarships to train in New York. Some of these, male and female, became members of the New York City Ballet and other companies.

The most difficult task for Betty was raising funds and building viable boards for both the junior and senior ballets. At that time the established arts institutions and possible patrons seemingly felt no urgent need for a ballet company. Los Angeles has a reputation for lack of long term support of such a venture. Betty, though inspired on many levels, had a lot to confront.

Balanchine suggested John Clifford to be the director of this newly formed professional Los Angeles Ballet. Betty was the Executive Director. Under their direction and for 12 years, the company grew. Balanchine liked Clifford’s choreography and granted permission to use some of his own works and costumes for the fledgling company. The company increased its repertoire, toured substantially and created a company school.

In one creative move, Betty convinced Union Oil to allow and finance the construction of an outdoor stage at the foot of the twin towers in Century City and just below the balcony leading to and from the Shubert Theatre. Transient movie goers could watch the ballet for free as they came and left the theater.

The company disbanded in 1985 and became the smaller Ballet of Los Angeles, touring under Mr. Clifford’s direction.

In 1976, Betty gathered a group of dancers, choreographers, artistic directors and managers to explore whether the Los Angeles dance community wanted or needed an organization to represent its interests. From these meeting emerged the Los Angeles Area Dance Alliance (LAADA). This nonprofit service organization , whose purpose was to unite and promote Southern California dance and build public support, helped many of our current well known dance artists gain recognition. LAADA became a model for other cities to emulate in support of dance.

In 1977 LAADA presented a highly successful showcase at the John Anson Ford Theatre. The Bella Lewitzky Dance Company led the bill with L A Ballet, Aman Folk Ensemble, Rudy Perez and Margalit. Betty, working with J. Foster of the L.A. County Music and Performing Arts Commission to plan future performances, Dance Kaleidoscope was born. The festival was produced annually at the Ford until 1985. A distinguished selection panel was formed to program the performances drawn from a large number of applicants. Important on many levels: to the artists and to exposure of the community to quality and diverse styles of dance, it was a touchstone for many other creative endeavors in Los Angeles. Dancers had a place to perform on a regular basis.

In 1984 Betty and her husband decided to retire. Betty, working to the end, had a serious accident, breaking her hip. She had also previously committed to organize and oversee the Olympic Cultural Dance Festival. It was not surprising that she pulled through this difficult time with task completed and a handsome representation of Los Angeles Dance for the festival.

It was Betty’s hope that the pioneering aspects that she and others confronted in bringing dance to Los Angeles would serve as a structure for others. A structure that would allow artistic growth by bringing permanency and funding to this important art.