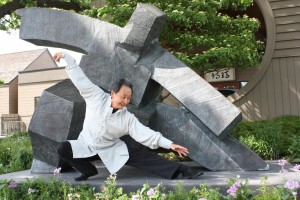 Chungliang Al Huang at the installation of Zhu Ming Tai Ji sculpture at "The Marsh" in Minneapolis 201.

Chungliang Al Huang, born in China, was immersed in the traditional study of Tai Ji, Kung Fu, brush calligraphy, and classic Chinese scholarly arts from a young age. In 1949, his family fled mainland China for Taiwan where he continued his studies. Huang came to the United States in 1955 as a university student. His intuitive knowledge of the ancient wisdom and rich traditions of his native China led to early collaborations with philosophers and scholars such as Joseph Needham, Joseph Campbell, Alan Watts, John Blofeld, Gregory Bateson and Huston Smith.

In demand as both a keynote and motivational speaker at conferences and workshops around the world, Huang returned to China in 1982 as a consultant to prominent American business groups. He is now the director of the International Lan Ting Institute with its Chinese base in the sacred Wu Yi Mountain, a UNESCO World Triple Heritage Site rich with historic, religious, and cultural arts traditions; and its United States base in Gold Beach on the Oregon coast. From the renowned Esalen Institute in Big Sur, California, to the world’s major capitals, he shares the stage with luminaries such as His Holiness the Dalai Lama and anthropologist/primatologist Dame Jane Goodall. Huang was also featured in the 1988 inaugural segment of the PBS series “World of Ideas” moderated by Bill Moyers.

A celebrated author, Chungliang Al Huang has a number of best-selling books to his credit. These include the classic Embrace Tiger, Return to Mountain, which has been translated into 14 languages and is now in its 39th year of publication. Other popular titles include Essential Tai Ji, Quantum Soup, and The Chinese Book of Animal Powers. Huang is co-author of Tao: The Watercourse Way with Alan Watts and a series of books with Jerry Lynch on sports/body/mind training such as Thinking Body, Dancing Mind; Tao Mentoring; Working Out, Working Within; and The Way of the Champion.

In recognition of his contributions and achievements, Chungliang Al Huang was awarded the Gold Medal of Education, one of China’s most highly regarded honors, for his pioneering work in Modern Dance in his birth country; the highest rated New Speaker Award from the Young Presidents Organizations (YPO), and the Broadcasters Award from New Dimensions Radio. He is a research fellow at Academia Sinica; a fellow of the World Academy of Arts and Science, Stockholm, Sweden; and an assembly member of the Council for A Parliament of the World’s Religions.

Prior to founding the Living Tao Foundation, Huang enjoyed a successful career as a dancer and choreographer, directing his own Theater Dance Company, performing at international festivals such as the Jacob’s Pillow, American Dance, New York City, and Oregon Bach Festivals; and at Findhorn, Scotland and Kuhmo, Finland. He performed with cultural and pop icons such as Sammy Davis Jr., Bruce Lee and John Cleese, and his acting and dancing credits include Flower Drum Song and Green Hornet.

Throughout his remarkable life, everything that Huang has accomplished has been imbued with Taoism, Confucianism, and Buddhism (Zen)—the Three Pillars of Asian Wisdom. His natural gifts as a teacher/mentor and his intuitive knowledge of the intellectual and spiritual aspects of East/West synthesis, along with his total devotion to his students, have endeared him to thousands of people around the world.

Program Notes from “The TAO of BACH” Concert:

“East meets West” has been for me a lifelong personal pursuit for cultural-arts synthesis.
Growing up in China, steeped in the classics and the practice of Tai Ji and Kung Fu, I arrived in the USA at 17 to study architecture. While in college, I was attracted to the creative expressiveness of modern dance. In 1956, my sophomore year, I was “the Asian” dancing the role of the cowboy Curly in our college production of the Rodgers & Hammerstein musical Oklahoma!.

Western music, especially that of Johann Sebastian Bach, was my entry into the Western heart and soul as a young artist. In 1979, Yehudi Menuhin invited me to teach at his music school in Surrey, England, for prodigious children from around the world. One of my most treasured memories was an early morning at the school in Stokes d’Abernon when a 10-year-old violinist from India asked me to practice with him. He was playing Bach’s Chaconne in the center of the room as I danced Tai Ji around him. At that magical moment, East and West, the twain, were undoubtedly met.

Yehudi enticed me to teach there with an “impossible to refuse” offer as exchange: each time I landed in London, he would invite me first to his house in Highgate Village, playing Bach to help me transcend jet lag from the long flight across the Atlantic. The photo accompanying this note, of the two of us communing with “The Tao of Bach”, was taken by violinist Nigel Kennedy, a recent graduate from the Menuhin School, who was being coached that day by Yehudi as he prepared for his debut with Simon Rattle and the Birmingham Symphony.

In 1980, The Paul Winter Consort and I co-created the “Tao of Bach” cathedral concert tour, beginning at the St. John the Divine Cathedral in New York City and ending at the Grace Cathedral in San Francisco. Alexander Murray was a mentor to us all, and his transcendental playing of the Bach Flute Partitas lifted the spirit of my Tai Ji dancing from Font to Altar in these cathedrals.

In 1981, David Darling, a former member of The Paul Winter Consort, and I performed together at the memorial concert for John Lennon, “Give Peace A Chance,” in Boulder, Colorado. Our collaborative kinship as teacher/performers has continued to stretch and blossom. David is a true Tai Ji dancing musician.

I met Michael Fitzpatrick at The Parliament of the World’s Religions gathering in Barcelona in 2004. He is often the musician who introduces the presentation of His Holiness the Dalai Lama at these major international gatherings. I admire and share Michael’s lifelong pursuit in the immersion of the Bach Cello Suites. His deeply focused and dedicated perennial practice of these magical suites of dances mirror my lifelong Tai Ji practice.

Ann Yeung is a relatively new kindred soul. When I dance to her playing Bach’s Goldberg Variations on the harp, I experience the East/West synergy, transcending time and space in perpetual joy and bliss.
I am grateful to all my musician friends for joining me tonight with this Tao of Bach, A Musical Tai Ji Dance Offering. I extend a special mention of gratitude to Ko Si Chi, a world-renowned photographer and Chinese national treasure, with whom I share nearly five decades of kindred collaboration. His dance photographs of my partner-dancer Suzanne and me are adorning the lobby at Krannert Center this week. Also, it is my delight and pleasure to introduce dancer Jessie Fan (Mrs. Ko) for the exquisite artistry of her DunHuang dances to highlight our “Gracious Aging” and Wellness panel discussion this week.

Donna Cox and Robert Patterson of the Emerging Digital Research and Education in Arts Media (eDream) Institute have become Tao friends with their interest and personal immersion in learning the Tai Ji dance with me. All my years of wishful yearning to make the flowing Chi (Qi) visible to the audience is finally, and beautifully, realized with the amazing technical genius of their work. I thank them and the Krannert Center staff for joining me to co-create this kinetic, sonic, and visual magical event.

Finally, I wish to express my gratitude to Krannert Center, a very special haven where my wife, Suzanne Pierce, and I came as the first artists-in-residence, performing at the Center’s inaugural week in April 1969. A most special thanks goes to director Mike Ross for his kindred spirit and his persistent urging to entice me back for another performance. I am honored to be on the Tryon Festival Theatre stage again through the efforts of the Krannert Center management and production staff.

Together, tonight’s guest musicians, technical artists, and I share this co-creation—The Tao of Bach: A Musical Tai Ji Dance Offering—with you.

The TAO of Bach Program Cover and newspaper article: