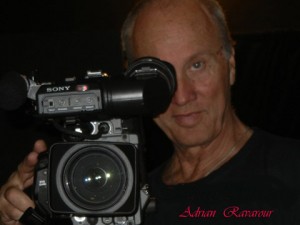 Adrian Ravarour began music lessons at three; later, preferring dance in his teens, he entered dance training at the San Francisco Ballet School and became Harold Christensen’s class demonstrator. Promised two Ford Foundation scholarships, he was ignorant that he needed to submit applications. Consequently, he became a staff member at Intersection Center for the Arts in San Francisco where he was poetry director. In 1965, Ravarour and three friends founded Vanguard a LGBT gay liberation organization where Ravarour taught the kids to demonstrate for equality, acceptance and an end of discrimination; and then, in 1967, Ravarour renamed the Vanguard group as The Gay and Lesbian Center. The following year, Ravarour conceived the Energy Flow System of the Arts, a philosophical construct and design system that formed the basis for the following decades of artistic creative work in dance, choreography, performance, painting, photography, film, video and writing. For the next ten years Ravarour taught, performed, and choreographed dance as his main art form, and had photography/painting as his second activity. Beginning in 1968, Ravarour taught dance at Nancy Lang and Mary Anthony’s Carmel studios, where he performed in Lang’s company and his own Energy Flow Dancers with Gloria Elber, plus other modern and ballet companies. It was during this decade of professional dance work in Carmel that Ravarour also received photographic mentoring from Cole Weston, son of famed photographer Edward Weston.

Ravarour inadvertently ended his professional dance career when he received two offers:   Hamilton Brown admired the sweeping geometry of Ravarour’s modern ballet choreography and Brown offered to fund Ravarour’s founding of a ‘Hamilton Brown Ballet.’ Although, he followed the second offer from Dr. Low Han Min that who recommended that Ravarour establish energy flow dance as an academic subject that he could eventually instruct at colleges. Moved by the possibility of teaching his energy thematic dance form at colleges, he moved to San Francisco where he first received a B.A. degree, and then pursued the earlier recommendation at the Union doctoral program that paired Ravarour’s energy thematic dance form with Eastern philosophy and ch’i under Dr Jose Arguelles. During the years of this second San Francisco period, Ravarour also trained as a cameraman and became a director at CH 25.

At forty, Ravarour moved to Los Angeles to finish his doctoral dissertation on Energy Flow Choreography. Still a gifted dancer, he sought work as a dancer, but was unknown in the LA dance community; however, he was hired as an administrator at the Los Angeles Area Dance Alliance. Following the demise of LAADA, Nancy Mason Hauser hired him as a cameraman to record the dance performances of LA based dance companies which he did for five years. Then, Nancy sold the Dance Video Center in its entirety to Ravarour. He gained non-profit status and then shot LA dance until 1996 when he became the festival video-cinematographer for Jacob’s Pillow for the next two years, and that was followed by other NY dance work.  In 1999, DanceUSA named him as among the top videographers in the USA for dance. By the end of the century, arts funding had dried up and few dance companies could afford videos. So in the last decade, Ravarour focused upon Fine Art Photography, wrote a dozen works for New Age composer Christopher A. Flores, published several books, and occasionally recorded LA dance. Academically, it was only after the years of his professional dance work that Ravarour earned an A.A. in TV Broadcasting; B.A. in Creative Arts; M.A. in Theatre Arts; M.A. in Dance and Video; Ph.D. in Creative Arts; and, honors in all degrees, FKF, AGS and Golden Key.

Denise Delgado-Torres: Debbie Kay no my grandmother, Lilly Aguilar passed in early 80s. I would love to see film that you found!