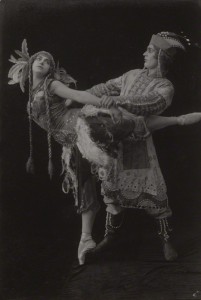 Tamara Karsavina as the Firebird and Adolph Bolm as Ivan Tsarevich in ‘L’Oiseau de Feu’ (The Firebird) by Bassano vintage proof print, 27 June 1912. Housed at the National Portrait Gallery.

Adolph Bolm (1884-1951) was born in St. Petersburg, Russia where he studied at the Russian Imperial Ballet School. In 1904, he graduated and joined the Maryinsky Ballet Theatre where he partnered with Pavlova. In 1909 he joined Diagalev for the first performance of Les Ballet Russes in Pairs, but returned to Russia as a Soloist for the Maryinsky Ballet. In 1911 he permanently resigned from the Imperial Ballet and rejoined the Ballet Russe in 1912. As part of Diaghilev’s Ballet Russe, he helped to organize two US tours in 1915 and 1917. In 1917 he sustained a spinal chord injury during the tour and decided to remain in the United States. He first worked with the New York Metropolitan Opera, and he founded his own company, Ballet Intime, comprised of international ballet stars. In 1919 he relocated to Chicago where he founded Chicago Allied Arts and began associating and dancing with Ruth Page. He moved on to California where he assisted with the San Francisco Opera Ballet and was instrumental in founding the San Francisco Ballet. In Los Angeles he helped program dance at the Hollywood Bowl including his 1931 ballet “Spirit of the Factory”. He was also one of five choreographers that helped found Ballet Theatre in New York, and he continued to choreograph and stage ballets for the company throughout the 1940’s.

If you represent Adolf Bolm or have material relevant to the artist, we invite you to contribute.
Update information for Adolf Bolm >>