I met Marion in late 1969 when she arrived from New York. I was teaching some technique classes at UCLA and performing with the Bella Lewitzky Dance Company and she was just starting out as a guest artist in the dance department. We had very little contact at that time because I left in 1970 to teach at Florida State University for the next two years.

When I returned to start the Masters program at UCLA in 1972 I was privileged to be able to teach the sophomore class. Marion was teaching the senior class. My early memories of her were always seeing her backing away in the halls to avoid me, coming the other way. She did not move easily and found my energy too much to be near. If she somehow missed seeing me along the hallway, I would slow down and try to move as gently as I could, but she would still be startled as we approached each other. She seldom talked to me. That went on for several years.

For some reason she took a chance to work with me in Doris Humphrey’s Partita which she was mounting for the UCLA Dance Company in 1974/75. I have never been sure why she did that, but that started a relationship which lasted for over thirty years. I have been deeply grateful for that ever since.

Kathe (Copperman) Howard was working on her Masters degree and teaching the freshman class. We had become close friends and colleagues. She and I, with four other artists, began Eyes Wide Open Dance Theatre in the summer of 1974. We both were asked to be in Partita, along with Melanie Snyder who was also a founding member of Eyes Wide Open, and it was during these rehearsals that Marion got the idea to create a new work for Kathe and me.

We began rehearsals on Mysterium in the fall of 1975, working several hours a day, 2 to 3 days a week. The piece progressed nicely over the next 5 to 6 weeks. She had created a fast moving choreography of about 6 minutes duration for Kathe and myself, utilizing our skills, and we were pleased with the results so far. In the coming rehearsals we were quite sure we would be developing and refining the material for the upcoming UCLA Dance Company concert. However, that was not to be. Marion had been contemplating the work and decided she wanted to bring out something different in the two of us. She was curious to see if we could contain our usual explosive energy and not rely on our technical skills as much.

So we made a fresh start with a very small element, a tiny phrase of movement, she had chosen to explore. Another 5 to 6 weeks and we had developed another 6 minutes or so of choreography. Kathe and I were relieved we had something we could begin to clean and clarify for the concert. By this time we were into the winter quarter with the concert date looming close at hand.

Once again Marion came into our next rehearsal, looked at us, and said she was not satisfied with the piece and would we mind starting again. She had an image of our bodies pushing and pulling, pulsating on the floor, over and away from each other. 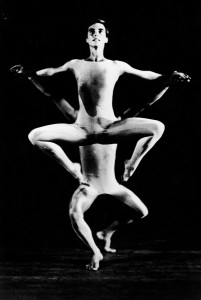 With the concert date weeks away, and feeling very unsettled, we agreed to trust her intuition. We began again for the third time. In the process of developing material and discarding it to discover yet more movement ideas to work with, the three of us had begun to merge as one voice. A trust had developed and an intuitive energy had engaged us. Each of us had surrendered to the work at hand. It took us very little time to finish the choreography after that. What emerged was a hauntingly beautiful piece – Mysterium.

It is my strong feeling that during this period in Marion’s life, struggling with the loss of her own technical skills and use of her body that she was searching for and trying to discover something to replace what she had always relied on in her own technique and flexibility. With Kathe and me, it was apparent she was reaching for a new way to work, relying more on an inner source to express her ideas. It was also evident in several other pieces she choreographed for the UCLA Dance Company, most notably Sevenfold and Initiation. Dance was her source of life and expression and she had to keep doing it. It was imperative.

Her teaching had begun to shift when she arrived in California. In order to help her students begin to find that inner resource, that intuitive response to their choreographic intent, that wasn’t reliant on steps, technique or movement vocabulary. She began to access her own research into the Asian mystics and teachings. She had become intent on going deeper, to that urge in ones soul to move, to speak through movement that was in some ways more primitive, more urgent and authentic.

During her years at UCLA she was influential in helping a number of young dancers to find their voice as a dance artist, most notably a group of young dancers who came to UCLA from other countries who wanted to explore ways of blending what they brought to America with what was happening here. Instead of pasting on movement from the American culture she was able to assist them in discovering ways to delve into their own rhythms and culture, their own particular sensitivities to create something unique to them.

Years later, after she had retired from UCLA and Santa Monica College she decided to develop a company of dancers of mixed ages and experiences which she called Spirit Dances. There was a core group of dancers with various other artists coming and going depending on the idea she was engaged in at the time. What excited her was not just creating a dance in the usual way but to work from this intuitive level that came from spirit in the Jungian sense, and to do it as a unit. It was a challenging concept. There was always a thematic thread to begin which the dancers would agree upon and discuss, then explore the concept and interpret it as they felt inspired to do. It was daring. It was difficult for many of those who participated, sometimes meeting the challenge better than at other times. It was always intriguing and informative. The artists would come together, usually on weekends, often working in her recreation room at her complex on Wilshire Blvd. to play, to improvise or share ideas and the beginnings of their dances.

I was privileged to be invited to dance in several of the later concerts. We would work together as often as we could, encouraging and challenging each other to do our best. And we ate and laughed and connected in turns. Inevitably, something would begin to happen and we would turn the corner, finding the idea in movement we were trying to reach. A bond developed and an idea became an emerging concert. It was a wonderful experience. Roberta Wolin, her long time right hand support and the co-producer of Spirit Dances said that Marion felt these concerts were her most important contribution. They seemed to have been a culmination of a lifetime of investigation, inspiration and unfoldment of her own creative adventure. She was tough, caring and ultimately passionate about dance and its power to communicate. I feel fortunate to have been on this journey with her. She had a profound impact on my own creative search and discoveries